We have chosen “The Hidden Talents of Bulgaria”

After three months of collecting and looking through applications from around the country our team has finally made a decision and we have chosen 8 children who will be part of the first year of our new program. “The Hidden Talents of Bulgaria” is a year-round mentorship program that will give a chance for a better future to children from unprivileged backgrounds in Bulgaria. Every year the program will choose and work with a number of gifted children deprived of parental care and it will provide them with a team of mentors, tutors, specialists and volunteers, as well as private lessons, materials, access to seminars, workshops, competitions and other educational activities in order to ensure a brighter future for those who cannot afford it. For more information click here. 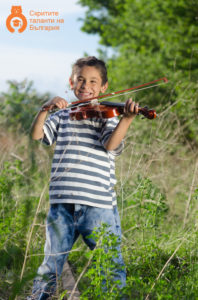 He is only 7 years old but he dreams of becoming a famous violin player and one day achieving the level of his grandfather, who is a professional musician. This talented child has a very strong emotional bond with his granddad and he plays an important part in the life of this young soul. The skilled violin player in his family has already given our youngest participant his first lessons in music and our youngest talent wants to follow in his grandfather’s steps.“He attends school regularly and has no problem with the school curriculum. He can even read and do simple maths with numbers up to 20…” – his caregiver.

“Hello. I am 7 and I want to learn how to play the violin. My grandpa is teaching me at the moment and I really like it. I am a student in first grade and I want to become a violinist.” – our Talent. 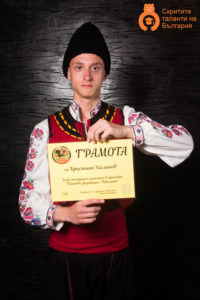 This young fellow has an excellent score at school. He has chosen the artistic path of a dancer. For the past 7 years he has been part of a famous dance association and his involvement there makes him ambitious, diligent and responsible. He has never been late for practice and is quick to make friends amongst his group of peers who all share the love for the art of dancing. This talented boy always puts immense effort and precision in his work in order to present a perfect performance on stage. His ambition is to one day become a choreographer. He wants to pursue this dream in Plovdiv, where he can study the subject of choreography and dance. During the next 9 months our team will create the best possible creative learning environment for him in order to make his dream of becoming a professional dancer come true. 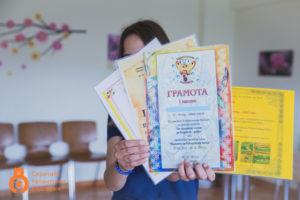 This beautiful artist has successfully graduated from primary school and has been accepted to study in the Professional Fashion Design and Textile High-School. The girl exhibits highly developed skills in Applied Arts. She has participated in a number of competitions and won the following awards:

She also attends Traditional Bulgarian Dancing Classes and takes part in regional performances. Together, we will develop her abilities in the world of Applied Arts and Drawing.

“Asen quickly conquered the first serious task he was given as a young teenager – to develop a serious attitude towards school. In the past 4 years he has developed motivational skills to study and work hard which have resulted in great personal success in his life. That is how he graduated from 8th grade with very good results.” – his caregiver.

Right from the beginning, the team of social workers and teachers who took care of Asen, discovered his wonderful talents in sports and music and started working hard on their development. Many regional and national achievements followed after. He has acquired awards in the fields of table tennis, football and wrestling. However, Asen received the greatest support, when he started pursuing his singing career. He is regularly involved in musical festivals and competitions where he is always awarded for his exceptional skills.

The greatest success Asen achieved was when he participated in last year’s edition of “You’ve Got Talent” in Bulgaria. The impression he left in both the jury and the audience and the prestigious 4th place he won, gave him new hopes and the courage to follow his dreams. To continue his studies in the field of music he moved to Sofia. Asen is currently in need of additional, pre-soloist training and lessons with a vocal music teacher. He longs to create a better future for himself and to live an independent and dignified life through the means of art and his God-given talent.

“Music has been my whole life ever since I was a child. I dream of pursuing a professional singing career and one day performing with my favorite artists. Until now, no one has worked with me and my voice. I wish I could enroll in the National Music Academy and develop my skills as an artist and a performer with the help of a knowledgeable and experienced singing coach. I believe I possess a gift because I have been awarded with a number of prizes at different festivals and competitions. My greatest achievement, without a doubt, is making it to top 4 in “You’ve Got Talent” TV reality show. When I sang, people were mesmerized by my voice. When I was still a young boy I was given a percussion instrument known as tarambuka. My friend taught me a song and I realized that singing is my true calling in life.” 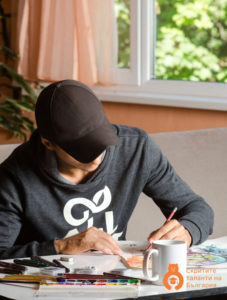 This young talented artist is currently in 10th grade and is studying Graphic Design. He strives to keep a good level in all school subjects, but is especially interested in literature and arts. He was chosen to be the official school representative at one of the National Art Camps, where he also won First Prize for Best Drawing. He works with professional artists to develop his talents and takes part in exhibitions in which many of his paintings are highly appreciated and sold. The boy has done internships in 3D Animation and Graphic Design companies where he has broaden his knowledge and skillset.

Last year he won a special scholarship which allowed him to purchase his own piano and a number of books in his fields of interest.

Not only is he an extremely gifted artist but he also has a talent for music. He is a self-taught piano player and a beatboxer and through strict daily routines and exercises he is continuously improving and developing his abilities. This ambitious youngster dreams of attending university and studying 3D Animation and Film-making after he graduates from High School.

Individual National Champion in Canoeing as a competitor in “Vanto-Vidin” Sports Club:

“With the athletics team of “Ivan Vazov” Primary School – Vidin we won the first place at the municipal, district and zone level and we got the right to participate in the school games in the city of Sliven in 2015. The team took First place in Bulgaria. In the High Jump discipline I was in 6th place and the 7th place in the discipline of Shot Push.” 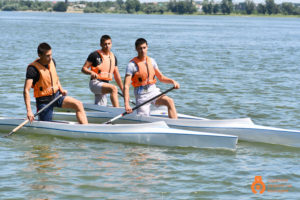 As a canoe competitor he has achieved the following accomplishments:

“I have been practicing canoeing for the past three years at the Vanto-Vidin club. My training started in November, 2013. I have had three years of competing, but I have not been able to rank first, yet. I also practiced basketball and I have a medal from the Vidin district; second place at streetball and three Medals from a regional round in Vidin in Athletics: II place in a Relay Race, III place in High Jump, III place in the discipline – four-hundred-meter run”.